In 2005 we had the opportunity to visit Borobudur.  If you are not familiar with Borobudur it is a 9th century (meaning this thing was built somewhere around 800 AD) Buddhist monument location in Central Java 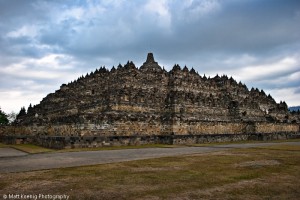 Indonesia.  We had been staying in Yogyakarta so we hired a driver who drove us to Borobudur.  The drive takes about 45 minutes or longer if you stop to see the batik and silver shops.  We got a late start as we had spent the morning at Prambanan.  This turned out to be a blessing for reasons that will soon be seen.

After paying our entry fee (foreigners: Rp. 95000 ~11USD Residents: Rp. 9000) we entered the grounds.  The entrance was actually a bit of distance from the actual temple but there is a shuttle you can take that brings you to the bottom of the steps leading up to it.  You can also choose to walk which is nice as the grounds are quite beautiful and the distance is not unbearably far.

As we approached the actual temple I was amazed at its sheer size.  Pictures do not do it justice.  You have to experience it for yourself.  It sits on a small hill called Kedu Basin.  After clambering up the multitude of stairs you find yourself on a broad shelf which is the first level of the temple also known as the foot (part of which is hidden). 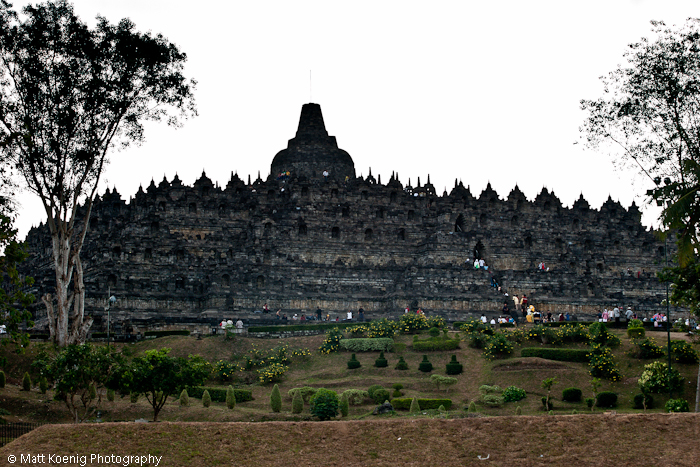 The temple has 9 platforms or levels each representing one stage of enlightenment; the six lower are square in shape and the 3 upper are circular.  While we were wandering around the foot of the temple admiring the sheer magnitude we were approached by a guide offering his services to show us around the temple and give us the history.  I forget what his rate was but it was very reasonable.  I strongly recommend finding a guide to take you around.  They are very knowledgeable about the temple and all the historical aspects of it.  Our experience would not have been the same without his commentary.  Don’t worry, they all speak very good English as well as a multitude of other languages.

Maybe they thought I was Brad Pitt?

While we were admiring the incredible beauty of the temple we noticed this group of school kids staring at us and pointing.  I looked behind me thinking there was some incredible site to see but there was nothing.  After several minutes of the staring, mixed in with an occasional coy wave, their teacher walked over and said something to my wife.  She came over and said the students were wondering if they could have a picture taken with me. Maybe they thought I was Brad Pitt? Whatever their reason I obliged and they all gathered around and we had some fun taking photos.  Later I saw them all a few levels above us on the temple smiling and waving. 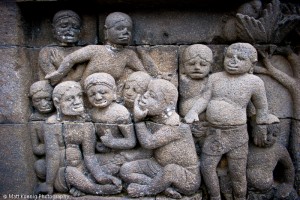 One of the coolest features of Borobudur are the bas relief panels.  Borobudur has approximately 2670 individual reliefs (1460 narrative and 1212 decorative) and cover the lower 6 square platforms.  The panels tell the story of Sudhana and Manohara and the search for ultimate truth.  These panels are very detailed and incredibly beautiful.  Our guide knew the entire story and would have recited all of it panel by panel had we allowed him to but we wanted to make our way to the top of the temple.

Each of the platforms or levels represents a stage of life.  To get to the top you walk in a clockwise direction keeping your right shoulder toward the center of the temple.  The base is called Kamadhatu and symbolizes humans that are still bound by lust.  The next 4 levels represent Rupadhatu or humans that have managed to free themselves of lust but are still tied to their appearance and shape.  The next 3 platforms are called Arupadhatu and symbolize humans that have been freed of lust, appearance and shape.  The very top part is referred to as Arupa and is where Buddha is residing; nirvana.  I made this entire walk with our guide all the way to nirvana.

My long ape arms finally came in handy and I have been granted extraordinary luck since 2005.

All along the journey are many Buddha statues.  There are a total of 504 throughout Borobudur.  At you reach the Arupadhatu level the Buddha statues are placed inside stupas.  There are a total of 72 stupas.  It is widely believed that if you can reach inside the stupa and touch the fingers of the Buddha that you will be granted good luck.  My long ape arms finally came in handy and I have been granted extraordinary luck since 2005. 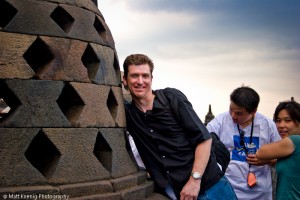 The view from the top is incredible.  Since we had arrived later in the day we were there for sunset which made it feel even more magical.  This was one of the blessings of coming later.  The other blessing was that people were now started to head for the exits so I was able to get some photos of the stupas and Buddhas without people in them.  Our guide took us to all the cool spots to get photos and assured us we were fine even as voices were shouting over the loudspeakers that we had to leave.

The main dome at the top is surrounded by 72 Buddha statues inside of stupa.  The view from here is incredible.  The temple actually sites between two volcanoes; Sundoro-Sumbing and Merbabu-Merapi.  Merapi is the volcano that erupted most recently causing so much concern.  One of my plans when we are back in Indonesia is to take a sunrise tour where you can get into the park early and get some fantastic sunrise shots. 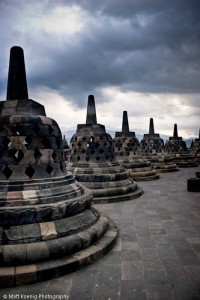 As we made our way down and toward the exit of the park we had to make our way through vendor stalls.  Thankfully due to it being so late now all of the vendors were gone so we didn’t have to endure any of the prolific selling propositions that I can only imagine go on during normal hours.  There was no direct exit that we saw.  Instead we had to wind our way through what seemed like hundreds of stalls.

It was near dark as we found our car and driver ready to take us back to Yogyakarta.  One thing to note if you are there in the evening; the CDC indicates that there is a risk of malaria at the Borobudur temple complex.  I did not take any anti-malaria meds or repellant but I thought I would make note of the risk indicated by the CDC for those concerned.

I really recommend seeing Borobudur in person if you find yourself in that part of the world.  It is an incredible site to see, and don’t forget that it is a World Heritage Site.  Make sure you get a guide because it makes the experience so much better.

Have you been to Borobudur?  I’d love to hear about your personal experience there.