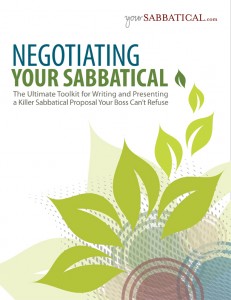 Last week I wrote about the successful presentation of my sabbatical proposal.  It was well received by my boss who thought it was a brilliant idea and something she wants to help me achieve.  Now to get it approved by HR.

When I was beginning the process of writing my proposal I really had no idea the best way to go about writing it and then actually presenting it.  I’ve never done something like this before and when you think about the idea of telling your employer that you want to take a year off and travel the world it starts to sound a bit crazy in the back of your mind.  You start to second guess your decision and desire and immediately jump to the conclusion that your employer will say no.

So I did what any person would do when confronted with questions on how to go about doing something; I did a Google search on writing a sabbatical proposal.  I found lots of good tips and advice on various websites but then I stumbled upon a guide from yourSABBATICAL.com that totally rocked my sabbatical world.  It’s called “Negotiating Your Sabbatical – The Ultimate Toolkit for Writing and Presenting a Killer Sabbatical Proposal Your Boss Can’t Refuse”.

At first I wasn’t sure I wanted to shell out the $49.95 for the workbook because frankly I’m a cheapskate most of the time (except when it comes to plunking down cash for photography equipment) but I decided to take a gamble with this product.  I’m so glad that I did because it turned out to be a complete guide to not only helping me clearly think through the reasons why I want to take a sabbatical and what I hope to gain, but also to think through the benefit my sabbatical will bring to my company.  Let’s face it; most companies only want to hear how your sabbatical will benefit them and what the bottom line is.  You’ve got to sell this to them in words and terms that they will understand.

The guide by yourSabbatical.com is broken out into 3 major sections.  Part 1 is called Foundation Building and works to get you thinking about what a sabbatical really is and the different types of sabbaticals (yeah, I didn’t realize there were different kinds either).  It talks about the benefits of a sabbatical both personally and from your employers’ perspective.

The things I really liked about this section were that the authors really got me thinking about what it is I really want to gain from my sabbatical.  They do this via a workbook method.  Yes, this isn’t just an e-book that you read and then apply what you think you learned.  It’s an actual workbook with action steps to take and questions to answer that build the foundation upon which your sabbatical proposal will rest.

At the end of Part 1 is a checklist that helps you rate and evaluate various aspects of building a strong sabbatical proposal.  A large part of your proposal is going to be educating your boss and company about the value and impact supporting your sabbatical can have on the organization as a whole.  It’s all about selling the proposal in a way that they can’t possibly refuse.

Part 2 of the workbook is called The Proposal and concentrates on actually writing a sabbatical proposal that your boss can’t refuse.  This is the meat and potatoes of the workbook where all your hard work and thinking from Part 1 come together into a beautiful proposal no boss can say no to.  Some of the topics include ‘why your sabbatical proposal is so important’, ‘choosing your best sabbatical idea for the proposal’ and ‘time to plan: your top ideas for a sabbatical’.  There are sample sabbatical proposals and a template complete with descriptions of each section that you can use for creating your own.  For me I found this part to be the most beneficial for putting together my proposal so that it made sense, it flowed nicely and it was a good sell for my company, meaning it concentrated on the benefits they would receive.

Finally Part 3 brings it all together in The Negotiation.  This is where you learn to present your best and strongest negotiation for a sabbatical.  You’ll learn the things that make a negotiation successful, some considerations that foster a favorable outcome and a step by step playbook on the negotiation meeting.  The authors also get you thinking about how your boss might respond and gives several of how you can counter any arguments.  The thing to keep in mind is that this is a negotiation which is like a two way street meaning there will be feedback and questions that you will need to respond to.  Being prepared for that and the questions that might come up will only strengthen your proposal and get you the results that you want, namely approval and support.

One of the biggest things I learned and prepared for is to think about how I would respond if my sabbatical proposal was denied.  You have to go into the negotiation with an answer to that question.  The workbook talks about several ways you can respond to your sabbatical proposal being denied.  For me the answer was “I feel so strongly about this sabbatical that I will go anyway”.  Your answer may be different so you need to think about it long and hard beforehand.

Finally there is an appendix filled with all kinds of resources including a sabbatical proposal template, burning questions everyone asks, a discussion planner and a list of action verbs for goal statements.

Overall this guide turned out to be an invaluable resource for me in thinking about, developing and presenting my sabbatical proposal.  I’m not sure that my proposal would have gone as well as it did had I not used this guide as it was intended, by going through all the action steps and workbooks.

Some things I would have liked to have seen would be more specific information tailored to various levels of jobs.  What I mean by this is that I felt it was focused more on the executive level and I would have liked to have seen more details (specifically on benefits to the company) for positions like I have, namely IT.  It’s not that the information isn’t beneficial but it would be nice to see more specifics tailored for different employment levels within any organization.

So who could benefit from this guide?  Anyone that wants to take a career break and desires to maintain their employment with the same company.  Regardless of whether your company has a sabbatical program this guide will help you craft the best sabbatical proposal possible.

Here’s something to keep in mind.  Chances are you have 1 shot at winning your employer over to the idea of you taking a sabbatical.  So wouldn’t you want to make sure you’ve prepared the best kick-ass proposal that you possibly can?  This workbook helps step you through that process and for me was well worth the money spent.  If you are considering taking a sabbatical and want to present the idea to your employer but don’t know where to start or how to go about it, then you should definitely consider this workbook.

If you have specific questions about the workbook please feel free to ask me.  I’m happy to go into more detail about my experience using it.  In the coming weeks I’ll be going into more details about and dissect my own sabbatical proposal.

Of course if you intend to take a sabbatical and never go back to your job then obviously all this is moot.  All you need to do is craft a nice resignation letter.

Links in this post are affiliate links and a percentage of any purchases made through them goes to support this site and namely my sabbatical.