A Toilet, A Hose and A Confused Moment Alone 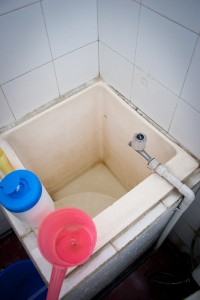 In the movie Demolition Man, Sylvester Stallone plays a cop (John Spartan) living in a violent age who manages to apprehend one of the worst criminals of the time, Phoenix, but was then ultimately convicted of a crime he didn’t commit and cryogenically frozen (what a plot!).  Then well into the 21st century Phoenix somehow escapes his own cryogenic deep freeze and wages a war on a society that knows nothing but peace.  So John Spartan was thawed out to try and once again apprehend his nemesis Phoenix.  But he awakens to a world that has significantly changed (culture shock).  In one scene he goes to use the bathroom and when he comes out the following dialog results.

John Spartan: [whispering to Lenina] Look, I don’t know if you guys know it, but uh… you’re out of toilet paper.
Alfredo Garcia: [confused] Did… did you say toilet *paper*?
Lenina Huxley: Um… they used handfuls of wadded paper back in the 20th…
[Lenina, Alfredo, and Erwin all laugh]
John Spartan: I’m happy that you’re happy, but the place where you’re supposed to have the toilet paper, you’ve got this little shelf with three seashells on it.
Erwin: He doesn’t know how to use the three seashells!

It’s a funny scene and reminiscent of my first experience using the bathroom in Indonesia (for the record they don’t have sea shells at least non that I saw).  My first exposure to the “hole in the ground” toilet was stopping at a small roadside restaurant near Puncak between Jakarta and Bandung.  I had just arrived in Indonesia for the very first time and while jet lagged and tired I was still quite hungry.  We sat out on this deck that had this beautiful expansive view of the surrounding countryside of mostly tea plantations.  You could look way down into the valley and see the traffic snaking along this twisty road.  It was just an incredible experience.  Of course after a meal of ayam and nasi goreng and a few Teh Botol’s and my bladder is indicating that it has reached maximum capacity.

Now I have a public bathroom phobia.  I don’t like doing my business in a public facility. It’s not like I have a wide stance or anything but I do like my privacy.  I’ll go to great lengths and put my bowels through periods of intense gyrations all to avoid using a public toilet.  But at this point I knew I wasn’t going to make another 2 hours of bouncing along the road without causing irreparable damage to an organ.  So I walked on over to where the bathrooms were and discovered I needed to make a choice about which door to enter.  One said Pria and the other Wanita.  Not wanting to create an International incident my first 2 hours of being in the country I sent a questioning look toward my fiancée.  She pointed to the Pria door so I went inside.

Upon entry I discovered that the bathroom was made for incredibly short people as the seat was flush with the floor.  Welcome to squat toilet 101 folks.  Secretly I was hoping to spot a button that when pushed would raise the seat up on hydraulics but no such luck.  Next to the squat toilet was a bucket and a scoop (thankfully there wasn’t a shelf with 3 sea shells) positioned under a water spigot.  OK, this was going to be interesting.  I was tempted to peak around to the other stall to see what other people were doing but thought that might be taken the wrong way.  Thankfully my business only involved a #1 crisis so I completed my mission and exited as quickly as possible.  Yes, I know what you are thinking.  I did indeed abide by the saying “If it’s yellow, let it mellow; if it’s brown flush it down.”  But seriously, does one take the scoop of water from the bucket and splash it all down?  It turns out this is exactly what one is supposed to do and also explains why the floor was completely soaking wet. 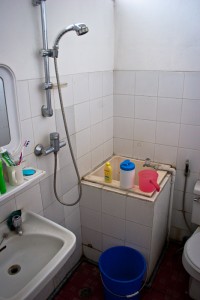 So I didn’t handle that situation with grace but I was soon to be tested with business #2 (the chicken and fried rice were attempting a quick exit).  After arriving at my in-laws house after hours of bouncing on roads my guts were ready to pop.  I excused myself and made my way to the royal throne hoping that I wouldn’t find a squat toilet.  I opened the door and saw a regular western style seat.  YES!!  I was finally back in my element.  Game on!  As I completed my handiwork I looked around for the convenient roll of paper on the wall.  Nothing!  I frantically looked around but didn’t see paper anywhere.  I started to panic a bit and worry that I was going to have to use my shirt or some other piece of clothing and I certainly couldn’t flush that. Then I spotted a little hose next to the toilet with a handle on the end; the kind that you generally see at the kitchen sink for washing dishes.  Since I wasn’t seeing any paper maybe this thing worked like a bidet and I was supposed to spray myself clean.  So with no paper in sight that is exactly what I did.  At first it was a bit startling and slightly unnerving to be spraying myself with a hose.  But I will admit that after a few weeks of this I actually preferred it to paper.  Just do your business, spray yourself clean and wave your ass around to air dry it.

Cold Shower With A Bucket

Then I decided to freshen up a bit by taking a shower. I noticed this container that looked like a really small bathtub filled with water.  How the heck are you supposed to get into that I wondered?  Then I saw a small bucket sitting next to it and surmised that one was not to get into the container but rather scoop water from it and pour it over oneself. Now I really prefer a super hot shower.  I like to come out of the shower with bright red skin that is borderline burned.  This water was on the other end of the spectrum.  Despite it being 90 degrees and high humidity that water felt cold.  It sent a shock through my body but after a few buckets it just felt plain refreshing.  Afterwards I did notice that there was a shower head but I ended up preferring the polar bear method as it left me feeling more refreshed.  It was only afterwards that my fiancee gave me the full tour and operational manual for proper bathroom use.  What I like about the bathroom there is that there is a drain in the floor so you are free to splash as much water as you like.  I’m constantly telling my kids at home “Don’t splash in the tub!!”  But it’s so warm in Indonesia that in 30 minutes or less the bathroom is dry and clean.  If I ever build a house it’s going to have a bathroom like this so my kids can splash all they want.

We take a lot of things for granted when we travel to new places.  I’m interested in hearing about your experiences overseas, be it in a bathroom or elsewhere.  Did you have a time when you were totally confused and didn’t know what to do or what the proper protocol was?  Don’t be shy…let’s hear it below.