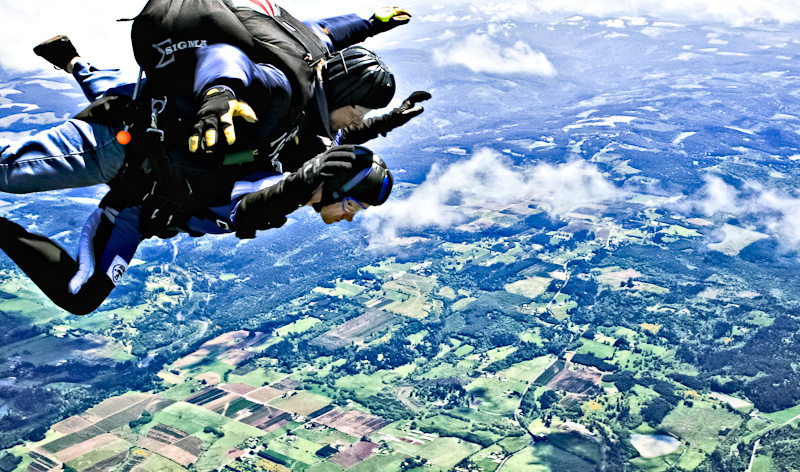 Mark, thanks for taking the time today.  One of the things I wanted to talk about is something that I think you know a bit about based on some recent events you participated in.  I know that a few weeks ago you not only jumped out of a plane from 13,000 feet but then a few days later you jumped off a bridge with nothing more than a few rubber bands attached to you.  I’m just amazed by you doing this because if I remember correctly you’ve mentioned that you have an intense fear of heights.  How are you able to overcome this and make these kinds of jumps that would scare the hell out of most people?

Yeah, I’ve really had a couple of fears that have kept me from doing various things in the past. One is a fear of water the other, as you mentioned, is heights. I can remember climbing a tower at Rib Mountain (Wausau, Wisconsin) as a kid and, although there were railings around the sides, being too scared to stand up. I could only risk peering over the edge of the upper level if I stayed lying flat on the floor, too terrified that standing would surely somehow allow me to be whisked away off the structure.

In other areas of my life, I’ve often tended to have a “no-fear” attitude, so these issues with heights and swimming have always really bothered me about myself. For years, they’ve kept me from taking part in activities that I see many of the friends around me enjoying. As I got older, I reached a point where I decided that I absolutely had to overcome them. Thousands of people go skydiving and bungee jumping every single day- all over the world. Why can’t I? What’s keeping me from doing them? Nothing . . . except for this little thing called fear. It took some time, but I eventually convinced myself that fear is an intangible force, one that, with enough intent, I, of all people, HAVE to have the gumption to overcome. The only obstacle between doing and not doing is ME.

Now you also paraglide as well which is amazing to me considering your fear of heights.  I’m curious as to how combating fear in the method you do has changed not only how you relate to your fear of heights but also your life in general?  How has your perspective on things changed?

I certainly can’t say that the paragliding (which is amazing!) and crazy jumps have eliminated my fear of heights, by any means. I’ve definitely had moments flying that terrified the hell out of me and made me curse and question why in the world I would ever launch myself off a mountain at 2,000 feet! But as my instructor, Dan, told me after one of my scariest flights so far, continually putting yourself back under that canopy gradually increases your “bump tolerance.”  After getting tossed around a few times, you get more and more comfortable with the fact that you are GOING to hit bumpy spots once in a while. No successful pilot earned his wings without being jostled around up there and challenged along the way.

All adventure sports aside, that TOTALLY relates to our lives. No successful entrepreneur, parent, spouse or who-have-you has gotten to where they are at, nor reached the goals they set for themselves, without hitting some roadblocks from time to time. The key is getting back in the seat, staying your course and learning from those hard knocks. Every rock in the pathway turns another meek explorer away, running for safer, more familiar land. Only the stubborn pioneer who climbs up and over every single one, collecting all of the bruises and rashes of “experience,” will break new ground and claim the new territory that others failed to find worth the struggle.

Good point Mark.  I think many of us fear failure more than anything and don’t make the effort because of that.  But it’s those mistakes and failures that we most learn and grow from.  As you know I am going on a sabbatical to Indonesia with my family and I’d be lying if I said I didn’t have some reservations and fears about it.  And I know in talking with others that there are plenty of people out there that get hung up on the fear factors as well, with some able to overcome it and others unable to.  As a fear-buster what are some insights or advice you could offer people who maybe can’t seem to get past certain roadblocks to be able to reach a point where they can take that leap?

Come on, seek help, people! Ha! No, seriously- seek help. Find someone who has done what you are looking to do. Someone who HAS jumped out of a plane before, or started their own business, or traveled to that country you’re interested in. Even if you can’t find somebody who has experience in exactly the field, topic or endeavor that you’re delving into, I’ll bet there are more than a couple people out there that have accomplished things similar in their areas of expertise. People that you could befriend, be inspired by and learn from. The majority of my social media circles are doing nothing that directly relates to my career as a musician. But I am inspired by them to kick more butt EVERY SINGLE DAY that I log on, read their posts, tweet short conversations and have Skype meetups.

Great advice Mark.  I know that connecting with people like you and Sean Ogle has really made a difference in the way that I personally deal with fear of the unknown.  Now I know you are working on a number of exciting projects.  You’ve got your music and teaching which is located at PowersPercussion and you’ve been working to make other people’s dreams and goals a reality with The Donating Drummer, congratulations on 6 months by the way.  And recently you launched BdayDday.  Tell me a little about each and what your future plans are.

Like you mentioned, PowersPercussion is primarily my “artist site,” focused toward my drumming performances and lessons. But I am also working on gearing the blog there more toward sharing some fresh ideas with musicians, artists and other creative-types. While not new to most online entrepreneurs, there are many tools and concepts (using email auto-responders and virtual assistants, for example) that are foreign to (but would greatly benefit) much of that audience.

TheDonatingDrummer (thanks for the congrats, by the way!) was actually inspired by a similar project started by a waiter in San Francisco. Visitors to the site can submit any wacky way that they would use roughly $100 to complete a goal or project of their own. Each month, I choose one application, donate income from one of my gigs and we make it happen! So far, I’ve been able to help give money to the ASPCA, launch an awesome website, get someone’s transportation going, pay off a student loan, supply food at a homeless shelter’s family event, buy two little girls’ dance recital costumes and give someone sailing lessons. I’m super excited to see what else we get to help with in the coming months/years!

My latest site, BdayDday kicked off in April, as a way to track my one-year progress toward location independence and share with (and from) others setting out to do the same.

I don’t know when you find time to sleep Mark!  I wish you the best in all these ventures.  Speaking of combating fear and living an adventurous life I know that we have decided to team up and ride motorbikes across Indonesia from Sumatra to Bali.  I’m really excited about this and I think this adventure is going to be epic.  How excited are you to be doing this and what do you hope to gain from the whole experience?

I’d say that, right now, I am EXTREMELY excited to set out on our crazy Indonesian motorbike bro-venture! But, like I said, I only say that NOW. Depending on what sort of bikes we’re able to land over there, I may be singing a different tune come mile 900 or so! Other than simply the adventure across the country, I am especially looking forward to discovering new foods, all of impossible-to-know-ahead-of-time unexpected circumstances that may arise, and the biking itself. Riding sketchy little motorbikes through treacherous Asian streets has, for some time, been one of my life’s favorite thrills. You and me, all the way across Indonesia?! Hells yeah!

Haha!!  Yeah, I’m equally excited about doing this with you and hopefully we won’t be pissing blood half-way through.  Mark, thanks again for taking the time to answer some questions on combating fear.  Do you have anything else to add that might be an encouragement to others out there who might be stuck behind a wall of fear?

Matt, thank YOU a ton for inviting me share with everybody at 1YearSabbatical! Parting words? One of my favorite approaches to life is taken by our mutual friend, Tyler Tervooren, who believes that if something seems scary to him, that’s EXACTLY what he should be doing. That’s reason enough for me. If what you are wanting to do is scary, it’s because it is obviously IMPORTANT to you. It’s scary because you COULD fail. You could be humiliated in front of everybody you know. That fear is a good sign! Trade-in your excuses. Replace them with the inspirational connections we chatted about earlier. Don’t look down- just jump! 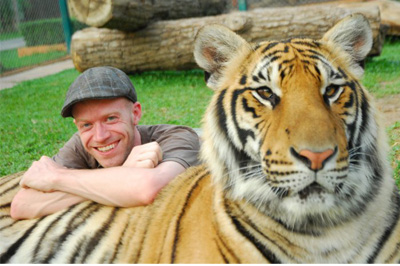 Mark is our Episode 1 Fear Buster!  You can connect with Mark on Twitter @MarkPowers or check out any of his projects linked above.

I’d like Fear Buster to be a regular series here at 1 Year Sabbatical so if you know someone who you really admire for busting through their own fears I’d love to talk with them.  Send me an email with details and we’ll see about getting them featured on the site.