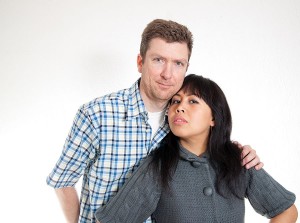 I met my wife in 2001.  It was during a time in my life when I was interested in connecting with people from around the world.  So I did what any normal person would do and I got online and started meeting people.  I made friends in Japan, Korea, Philippians, Singapore, China and Indonesia.  It was fun getting to know people from other cultures and listen to what they thought about the United States.  And I did this all online from the comfort and safety of my computer room.

Then one day while looking through Excite.com personal ads I saw a photo of a woman from Indonesia.  I read the ad but then clicked on through to the next one not really giving it much thought.  But over the course of a week that one ad kept popping up on my screen.  Over and over and over again.  So I replied not really knowing at the time where Indonesia even was (I later discovered that it was indeed on planet Earth).  But there was something about this woman that kept me interested so I replied to her ad with an email.

After a few days I received a response in my inbox “Hello, nice to meet you.  It will be better if you come to my country….I hope my wish come true.”  And so began the early stages of a wonderful relationship.  We exchanged photos.  We sent emails every day.  We even talked on the phone.

Side note: When calling internationally it is important to have an International phone plan.  I became very aware of this after receiving a $700 phone bill.  Thankfully the phone company was gracious enough to sign me up for an International plan and apply that pricing to all my previous calls. Of course now we have Skype and other VoIP solutions.

Our relationship grew over the next couple months.  In fact it really grew.  Even though we had never met in person we felt this connection with each other.  Some may scoff at the idea of a soul mate and that there is one person out there somewhere in the world that is meant just for you, but I truly believe that and it was then that I realized I had found my soul mate.

So we set a wedding date of April 30th which at this point gave me less than 2 months to prepare to fly to Indonesia to get married.  I had a passport to apply for, a suit to buy, plane tickets to get me there and plane tickets to get us both back.  I had to request time off from work, find someone to watch my cat.  It was crunch time.

Here is the thing though.  I was terrified!  I had never been outside of the US.  I was deathly afraid of flying.  And, at the time there was a travel advisory to Indonesia thanks to the Christmas bombings in Jakarta.  What the hell was I doing?

Despite all these concerns and fears I was actually really excited.  Here was my chance to live outside the pages of a National Geographic Magazine, to do something exciting and amazing and to marry the woman that I loved!  So I got my passport, booked my tickets and started to read and learn about Indonesian culture.  I wanted to be prepared for anything that life threw at me.

April came quickly and finally it was time to head out.  Everything was packed and I had my passport and tickets in hand.  Some friends dropped me off at the airport and I was on my way.  The first leg of the trip was from Eugene to San Francisco.  In San Francisco I walked the terminal while I waited for my 1AM flight to Hong Kong.  Again, fear and doubt hounded me.  Why did I want to do this?

There is something about airports that is exciting.  Maybe it’s the idea that you are in a place where you can hop aboard a plane and head off to anywhere in the world.  All it takes is a ticket and a passport.  You get to people watch and wonder where they just came from and where they are going.  These days when I see the contrails of a plane overhead I stop and imagine all the destinations it may be heading.

Finally I boarded my flight.  I had a lot of time to think on my 16 hour flight between San Francisco and Hong Kong.  How did I end up on this plane?  I had no idea what to expect when I finally landed in Jakarta and that made me a bit nervous.  I was a seriously green world traveler.

I finally landed in Hong Kong after starting to think that I was trapped in some kind of time warp and would never leave that giant metal trap with wings.  As we taxied into the airport I distinctly remember looking out that plane window and seeing all of the airport workers and the strange looking vehicles and thinking I was in a whole different world now.  I was no longer home.

Finally after another flight from Hong Kong to Singapore, a 5 hour layover and a quick 45 minute hop to Jakarta I arrived in Indonesia.  Here I was a nerdy white guy with absolutely no travel experience, a severe fear of flying, an inability to speak the Indonesian language, having passed through Indonesian customs, now walking out of the airport and onto foreign soil for the first time ever.  How did I do it?  How did I conquer all these fears that for years had always held me back from doing incredible things and living my dreams?

Maybe you are an artist and love painting but have been scared to step out and make a life out of it.  If you love it enough you will find a way.

Maybe you love traveling and have always wanted to live in another country, or travel around the world.  If you love it enough you will find a way.

Whatever it is you love, if you love it enough, you will find a way to do it.

In case you are wondering my wife and I have been happily married now for 9 years.  We have two sons and are looking forward to creating a new chapter in our life with our 1 year sabbatical to Indonesia.