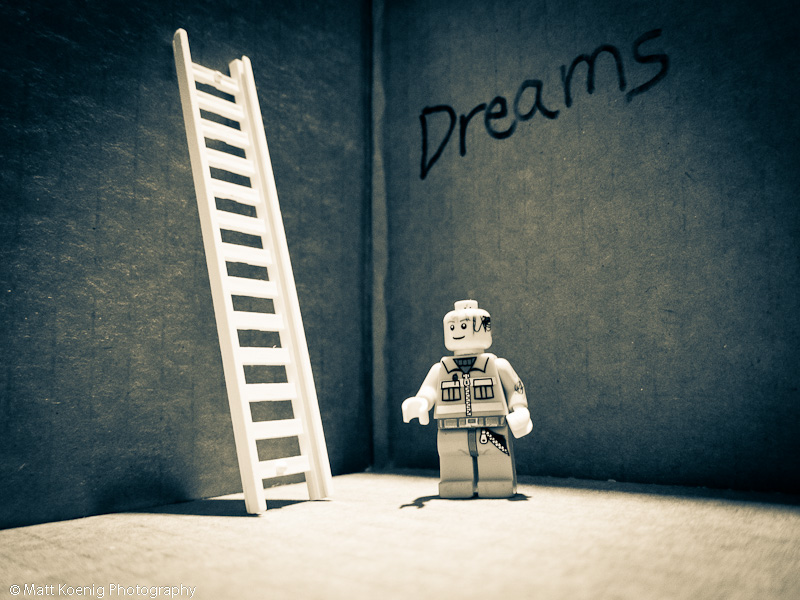 There are people who put their dreams in a little box and say, “Yes, I’ve got dreams, of course I’ve got dreams.” Then they put the box away and bring it out once in a while to look at it, and yep, they’re still there. – Erma Bombeck

I don’t exactly remember when I came to be inside a box.  But there I was nonetheless.  It was a typical box as you would imagine a box to be.  It had 4 sides, a bottom and a top.  I spent all of my time in the box.

For a time I was OK with living in the box.  It was comfortable.  The walls and top lent a feeling of protection and security.  I could only imagine the atrocities of the world my box protected me from.  Each day my mind was filled with all the things that could happen to me without the protection of my box.

But one day I noticed some writing and images on the walls.  I couldn’t understand them at first and yet they seemed familiar.  But as quickly as they appeared they were crossed out as if they were some obscene graffiti.  Sometimes they would reappear after a few hours and other times it wasn’t for weeks or months.

But as time went by they became more frequent and were removed less frequently.  As I studied them I became more intrigued about what they were telling me.  I began to wonder what was outside of this box I lived in.  Was the world really as bad and dangerous as I thought it was?

One day the top blew off the box and I could look up and see the sky.  It was this deep blue color with an occasional puffy white cloud floating by.  All day long I stared up at it.  As light began to be replaced by dark and day morphed into night I admired the millions of stars that twinkled down at me lying in my box.  I wondered if there was anyone else out there looking up at the stars from inside a box.

I awoke the next morning with the memories of the dream still fresh in my mind.  As I looked around my box I saw the walls covered with images.  I looked closely at them and realized they were all of my dreams.  These were my desires and hopes stamped upon the walls of my box.  Some were displayed in bright vivid color; others were faded like an old newspaper; and still others were hard to make out at all.

The days passed slowly and I spent my time looking at the sky above and studying the images of my dreams pasted all over the walls.  The more I thought about them the more depressed I became knowing that I was stuck in this box.  I began to form the beginning of a plan to escape.

No!  This box would not hold me forever!  I would break free of the confines of this box and search out the images covering the walls of my box and be able to see them with my own eyes.  Escape consumed my every waking thought.  I could think of nothing else.

As each day ended in failure I grew more depressed and despondent.  Would I ever escape this box?  In a fit of frustration I began to kick and punch the walls, my knuckles becoming bloody and my feet bruised and numb.  Finally in a single moment of complete despair I cried out; “Oh God please help me!!”

I collapsed on the floor of my box.  With my eyes closed I began to concentrate on what I imagined was outside my box.  My mind wove pictures and thoughts together until I felt like I was actually outside my box.  Suddenly I felt a cool breeze across my face.  I raised my head and opened my eyes. The walls of my box were gone and laid out before me was a paradise; an oasis of beauty.  I was stunned.

As I gazed out upon the scene before me in total disbelief I noticed there were many paths leading away from my box.  Each was unique and enticing and heading in a different direction.  Which path to choose?